The driving range is the distance your EV can drive with the energy stored in its battery.

An EV’s driving range can depend on:

The average range for an electric vehicle depends on the battery size. New EV models (post 2018) have driving ranges between 270-600km in a single charge. [1]

How the vehicle is driven

The way in which EVs are driven can also have an impact on range.  As with an internal combustion engine quick acceleration and fast driving can impact a vehicles’ fuel efficiency.

Driving in extreme temperatures (from -6C up to 35C) can affect battery range.  The use of heating and air conditioning can have a significant impact on an electric vehicle’s range.

In weather conditions of -6°C, driving range can decrease up to ~40% while using heating, but it only decreases 12% when heating systems are not used.

Similarly in hot weather temperatures of 35°C+, with the use of air conditioning the driving range can decrease up to 17%, and without air cooling around 5%. [2]

Range standards are a key driver of the EV industry because vehicle manufacturers advertise driving range to market their electric vehicles. As such, standardised range testing provides consumers with a uniform approach to range measurement.

There are three main standards used to measure a vehicle’s range:

WLTP is the newest accepted test standard. It is a dynamic test cycle that aims to reflect a more representative picture of real driving conditions. All new-car registrations in Europe from September 2018 are required to use WLTP range estimates. [3]

The WLTP will tend to show lower range and energy efficiency (fuel consumption) than NEDC values due to the more realistic conditions.

NEDC is the previously accepted standard of testing. It was designed in the 1980s but has become outdated due to technological advances and changes in driving conditions. [5]

The NEDC has been found to have large differences (around 38%) between tested performance and real world performance. In Europe NEDC results on carbon emissions were on average 123 grams per kilometer (g/km), significantly less than the 170g/km evidenced on real world driving conditions [7]. Discrepancies are attributed to unrealistic low testing parameters and the narrow temperature range of NEDC testing [8]. The NEDC tests determined values based on a theoretical driving profile, which are considered to not match current driving profiles [9]. 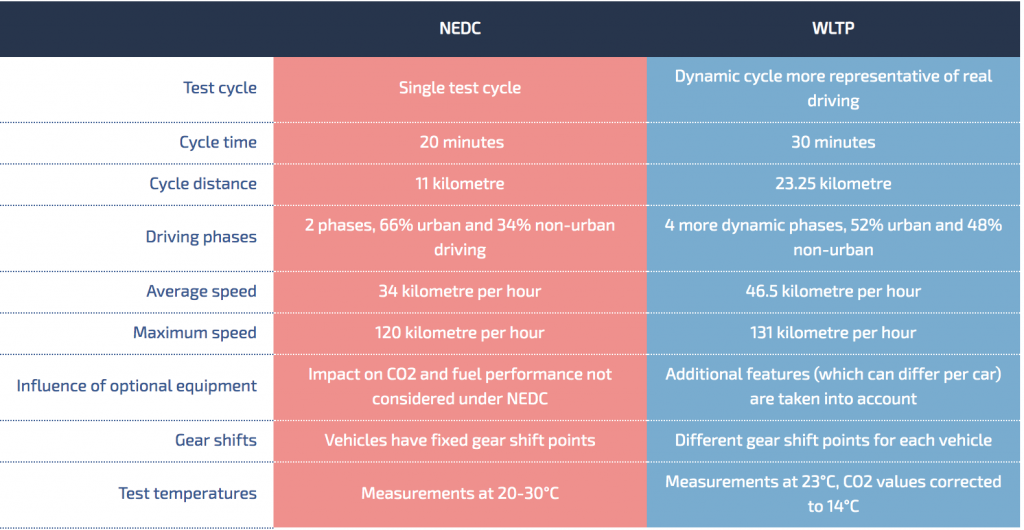 EPA’s testing standards are from the United States. They were established in 1978 and last updated in 2009, and they produce fuel economy estimates for the country’s fuel economy-related programmes.

The EPA requires car manufacturers to change and update their fuel economy values on fuel economy labels (the stickers visible in cars). The EPA tests for city, highway, high speed, with the use of A/C and in cold conditions. The EPA fuel economy ( energy efficiency and range for EVs) tend to show lower values than WLTP.

The table below shows the test cycles and its attributes.

The range displayed on an EV’s digital display is not 100% of the actual capacity of the battery. While manufacturers tend to advertise the rated capacity (the full capacity the battery can provide), some of this total capacity is also used for other purposes.

For example: battery management systems save a reserve of approximately 5% for emergencies and prevent damage to the battery. [12]

If an EV displays 0% charged, it has emergency reserves (just like in an ICEV) however, it is not recommended to drive a battery down below 0%, because completely draining the battery can affect the health of the battery cells.

An EV is typically between 20%-90% of its total capacity under most operating conditions. When discussing EV battery states of charge, common expressions such as “empty” or “fully charged” refer only to the portion of a battery’s capacity that is available for normal use, not its entire energy potential.

As the battery degrades, the battery management system will continue to show the virtual 100% of range until capacity reserves are fully used (see figure below) [13]. Once the battery gets to about 70% of its original usable capacity, then the battery is no longer usable for EV driving.