The electric vehicle industry is leading the way in developing secondary uses for end-of-EV-life batteries. An EV battery reaches its end-of-life at 70% capacity, [1] though this does not render the battery dead as they can still power less-demanding applications [2] such as load shifting, renewable energy storage and backup power. [3] By 2025 approximately three-quarters of used electric car batteries will be reused before they are recycled. [4]

Battery recycling could eliminate the source-product cycle, resulting in a closed manufacturing loop, and a circular economy. This has been one of Tesla’s goals since 2011. [5]

Repurposing EV batteries is a popular way to ensure that they are cost effective and environmentally friendly. Car manufacturers are innovating secondary uses for lithium-ion batteries. Renault, Nissan, and Renault are currently developing home battery products that extend the lifecycle of EV batteries a further 6-10 years. [6] Car manufacturers have identified that these secondary uses can make extra profits from the same product [7] and bring savings to household electricity bills. [8]

In Australia there are 14 million passenger cars – if they had batteries, they would hold more energy storage than the entire country’s electricity consumption in one day, even with low capacity and driving ranges of 250km. [9] They can be used to support the electricity grid.

Most vehicle manufacturers have plans for the second life uses of their electric vehicle batteries. You can read about them here.

This image from Bloomberg shows some of the secondary uses for EV batteries being used by automakers. 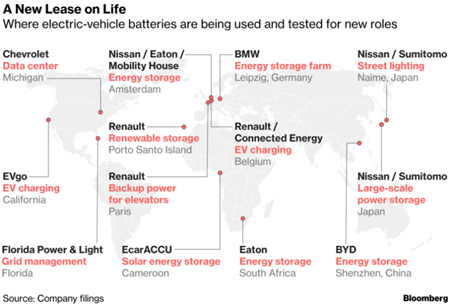