Keep up to date

Electric buses present an important opportunity for Australia to reduce carbon emissions via the public transport network, while bolstering the domestic manufacture sector. Government funded, Australian made assets become climate champions as they ferry commuters from their homes to workplaces -pre and post COVID 19. The time for electric buses has arrived.

Some governments in Australia already know this and have their eye on electric buses to help them meet Net Zero emissions by 2050 plans. NSW has made commitments to full fleet bus electrification. The ACT has completed an electric bus trial.

Early results have found that electric buses are better alternatives on whole of life economic cost, fuel energy efficiency, and environmental grounds. A summary of the findings from the ACT bus trial is detailed below: 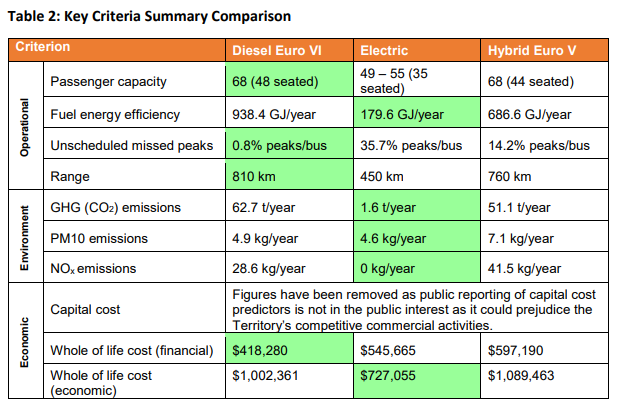 As can be seen from the table, electric buses did not perform as well in passenger capacity, range, and reliability. However, these issues have been addressed by significant advances in electric bus technology in the last two years and will continue to improve in the future. Public transport operators in 2020 can expect more models with improved range, higher passenger capacity and lower unit costs compared to vehicles in 2017.

Some manufacturers are designing fit for purposes buses to meet operator requirements, such as the Yutong bus for the ACT’s second trial. While the ACT may on their second trial, enthusiasm for electric buses is being felt in others.

In October 2019, NSW Transport Minister Andrew Constance announced ambitious plans electrify NSW’s 8000 diesel bus fleet to electric – citing the transition to electric buses as key to Sydney remaining a global city while challenging the industry to ‘begin an ambitious transformation of our bus fleet from particulate emitting diesel to zero-emission buses.’  Last week, Transport for NSW commenced their journey to zero-emissions buses via a call out for expressions of interest for trials of zero emission buses ZEBs and associated technologies.

Cities across the globe have been electrifying their bus fleets for some time now, to the benefit of citizens and the environment. Their positive effects are being felt from Barcelona, to London, Bogota, Shenzhen, and Los Angeles. It may have taken some time for Australian governments to jump on the bandwagon, but the EV industry has been preparing for the advent of electric buses.

In the last year, there has been movement into procurement, manufacture, assembly, and customisation:

Considering road transport makes up 19% of Australia’s emissions, the transition to electric road transport is an integral part of reducing our impact on the environment. Zero emissions public transport is a win – reducing pollution, carbon emissions, and congestion while improving air quality, communities, and commuter/driver experience.